(Washington D.C.) Unconfirmed Sources report that Mr. Trump will be launching a new consumer products company with the help of Trump pitchwomen Kellyanne Conway. The first product for the new company will be Trump Tie Tape.  The tie tape will be followed up by many other consumer products sources say. 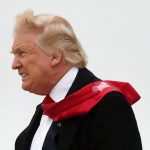 “This is going to be a great product!” says spokesperson Kellyanne Conway.  ‘This comes right from Mr. Trump’s experiences.  While playing the role of President, Mr. Trump’s tie is continually blowing around. Whether it be from Air Force One or the rowdy rally crowds a man wants his tie to stay put.  Trump Tie Tape is just the thing. Available for preorder on Amazon .”

The Trump Tie Tape will be available in single packs or convenient 5 roll packs.

Unconfirmed Sources political satire and news story parodies as represented above are written as satire or parody. They are, of course, fictitious.

Trumps Blasts Own Use of Anonymous Sources!

Ivanka Trump to Open Office of Reality in White House

(Washington D.C.) Unconfirmed Sources report that Ivanka Trump, daughter of the Mr. Trump the inhabitant of the White House, will be joining the West Wing. She will be heading up an office called the Office [Read more]

Recently In the News

All RIghts Reserved. Unconfirmed Sources political satire and news story parodies as represented above are written as satire or parody. They are, of course, fictitious.